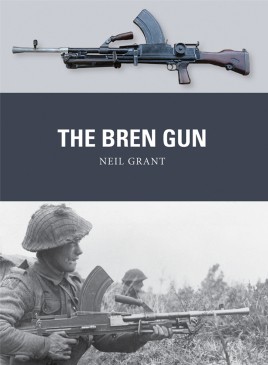 Adopted in 1938 and remaining in British service until 1991, the popular and reliable Bren was an iconic light machine gun, and arguably the most recognizable Commonwealth weapon of World War ll. Gas-operated and magazine-fed, it was based on a Czech design and was issued in large numbers during and after World War ll, as a section-level automatic weapon. Offering remarkable accuracy for an LMG, the Bren had an effective range of 600 yards, but could reach out to over 1,500 yards. It was generally fired from the prone position using a bipod, but could be fired from the hip when necessary. If kept clean, the Bren gave a reliable service in the harshest of environments, from the deserts of Libya to the Korean mountains in winter. As well as widespread infantry use, the Bren was widely supplied to resistance movements in Occupied Europe. Featuring specially commissioned full-colour artwork and based on meticulous research, this is an engaging story of the iconic light machine gun that equipped British and Commonwealth forces throughout World War II and in a host of postwar conflicts, right up to the Falklands and beyond.